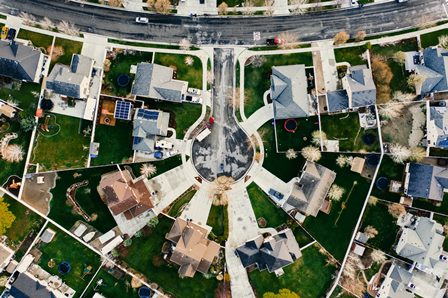 There are different Schools of Feng Shui and different ways to categorize House types. These distinctions mostly have to do with orientation, timing, or a combination of both.

In the Ba Zhai School of Feng Shui, as well as others, we have Eight House Types based on the eight basic directions of North, Northeast, East, Southeast, South, Southwest, West and Northwest. These house types are labeled according to their “sitting” or back side. For example, a house that faces Northwest will “sit” Southeast. This is assuming the back and front walls are parallel to each other. The real character or nature of the house is based on its sitting (back) direction. If the house sits Southeast, then it is called a Xun House. Xun is the Trigram word for the direction of Southeast.

There are Four Major House types from the Xuan Kong (Flying Star School) of Feng Shui. These are distinctions determined based on not just eight directions, but twenty four directions and in combination with Year of Construction. Each of the major eight directions (spanning a 45 degree range) can get split into sub-directions. For example, facing South at 170 degrees is called “South-1” and facing South at 180 degrees is called “South-2.” There is a big different just between these two directions and then it gets further identified based on Year of Construction. A house Sitting or Facing South-1 and built in 1970 is very different than a house sitting or facing South-2 that was built in 1990. As the saying goes, “Timing is Everything.”

With the notion of timing being critical in traditional Feng Shui, we have house types that can be defined just by the Period they were built in. We have 9 Periods that last 20 years each and they cycle continuously over 180-years and start over. For example, the last Period 7 was from 1984-2003 and the current Period 8 is from 2004 through 2023. 2024-2044 will be the upcoming Period 9. The nature of a house based on what Period it was built in can yield some general information about it, but it can also be as generic as simply noting the orientation from the Ba Zhai School. For more personalized and accurate understanding of a house, it is the combination of time and direction which produces that information.

The Period 4 House may easily attract creative type people, especially those who are employed in the entertainment industry. That is an example of timing. A house that sits East can cater more to an East type person (based on their birth year) and that is an example of orientation. One example of a house type that is considered generally supportive for health and wealth of the occupants, from the Flying Star School, faces Northeast-1 range and built in Period 8.

There are other short term ways to identify house types, such as the ones which go through a phase called a Locked Phase. This is a period of time when the house is not as good as it normally can be, before the Locked Phase begins or after it ends. Another way to identify house types could be based on their shape, such as the “Lightning Bolt” house, which has a zig-zag shape to the floor plan.

There are also “Special” House types, also based on when they were built and in conjunction with their orientation, which can identify some likely influences they may have on occupants. The Fu Mu San Gua House can be lucky for occupants, although prone to creating more drama. The “Out of Trigram” house on the other hand, can make occupants more stressed and worried and even succumb to psychological or mood disorders. This is a house type that has a border-line compass reading, such as right on the line between two major directions. There are even more house types identified in the various Schools of Feng Shui, but those mentioned in this article are some of the more commonly discussed ones.