Feng Shui In the Palm of Your Hand by Kartar Diamond 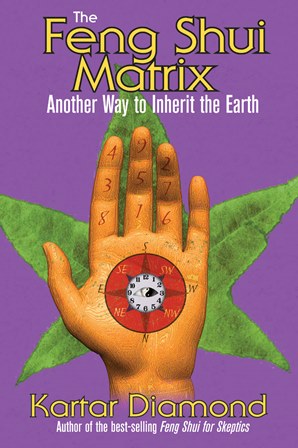 There is much symbolism, and in many cultures, to be found with the human hand. As it relates to Chinese metaphysics, the back of the hand is considered “yang” compared to the palm of the hand which represents the more yin forces. Yin-Yang theory is at the fundamental core of the Taoist world view. The yang forces represent expansiveness, so the term “heaven” is used often, but the yang forces go beyond heaven or sky. The yin forces are more hidden and in the earth, contained, but giving way to all life. QianKun are placed together as a Hexagram to convey this concept and are also referred to as mother and father.

We can explore the notion of Yin and Yang for the built structure, the natural environment, the human body, the expanse of the universe and the head of a pin.

Each finger is associated with an element, a direction, physical attributes and a celestial body.

This becomes quite practical when using hand postures for meditation, called “mudras” in the yogic traditions. By pressing a fingertip, you can stimulate the unseen meridian points. There are also two points for each finger which can transmit energy back and forth. Who needs a magic wand when you have this kind of power already in your hands?

Even the entire human body is a five-point star (2 legs, 2 arms, head-torso). Many cosmological and esoteric calculations resolve to the number 5. The luo shu is located on the fingers when the index, middle and ring fingers are pressed together. You can use your thumb to fly the stars on the palm of your hand.

If you want to add extra focus and energy to your meditation, you can choose a day of the week which represents a planet (or star) that is related to an area you want to strengthen.

As you sit up straight, cross-legged, you form a pyramid shape out of your body. We have 26 bones in the hands. We have 26 vertebrae in the spine. The human architecture is perfection and laden with numerological significance, such as the number eight being associated with Infinity.

As you breathe, you can focus on the fingers, the chakras, the inhalation and exhalation of the breath, your third eye point which can stimulate the pituitary gland. Mantra can also be added, to create a sound current in and around you. With these techniques involving, posture, mudra, sound, breath and focus, you can create quite a positive force of qi. This is how to balance your “inner” house.