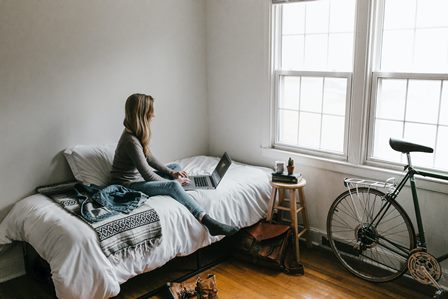 As a long time practitioner, I have seen many scenarios in people’s homes and businesses and can say now with confidence that some Feng Shui notions are not true in my experience or not so in modern day living. And this is coming from an author who has tried for decades to persuade skeptics that what the ancient metaphysicians were extolling is valid, a natural science.

I have even had a few vocal clients assure me that sleeping near an open window allows them fresh air and the best sleep of all. Who can argue with that? In fact, some practitioners speculate that some of these qi principles were over-exaggerated for the benefit of China’s Emperors (with ulterior motives), more than for the benefit of the common citizen.

Another notion is that one should not cook or stand at the stove with their back to the kitchen’s door. This is usually described as unlucky and capable of causing the cook to have an accident with the knife or boiling water or the hot stove. Why would this be so? The notion is that the cook can be caught off guard unless they can instantly see all who enter the kitchen while they prepare food. Most kitchens do have an arrangement where the stove is against a wall, inset in the counter space and it would require one to have their back to the rest of the room.

Sometimes we see a stove top in a central island where the cook can face the larger portion of the room or view into the next room, which is usually a family room. With thousands of kitchens having been evaluated, I have not had one single person report that they hurt themselves while cooking or were caught off guard by small children hanging around their legs while at the stove. Again, maybe in the olden days this was more of a concern than with the safer design of a modern day kitchen. But old principles can become superstitions if we don’t analyze the reason behind the pronouncement.

A house which sits (backed up to) east, southeast, north or south is called an East Type House. A house which sits to west, southwest, northeast or northwest is a West Type House. Then, the person is determined to be easterly or westerly based on their birth year. This is so superficial that it should not be used solely as a way to judge personal compatibility with a house type. In fact, there may be fifty more important things to consider when evaluating a house’s energy and how well the occupants will do in that particular space. Personal compatibility is important, but there are many other things to factor in above and beyond the East-West categories.

Compare these topics just discussed with the Feng shui belief that banana trees on a property can attract ghosts. Weirdly, this seems to be true to my experience. I have had almost 100% feedback that this is true for the houses I have evaluated with banana trees, although I can’t tell you why.