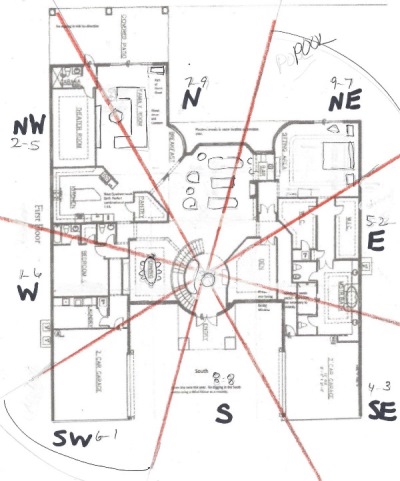 In the floor plan sample attached to this article, we see that there are several partially missing or mostly missing directional sectors.

What can be the influence of a missing directional sector of a home? Each of the eight basic directions is related to a family member and parts of the body. In Feng Shui for Skeptics, this is information presented on page 49.

Initially, it may seem like bad feng shui to have any missing sector, like missing an arm or a leg. It would seem as though the only balanced shape for a house would be a perfect square. With a perfectly square shaped house, the division of directional sectors is equal. But this is not the case.

On a more advanced level of feng shui analysis, we learn that there is a layer of influence called the flying stars. The flying stars are code language for a type of magnetic field created when the house was built. These flying star energies trump the first layer of energy related to the directional zone. For instance, if a person is missing the west sector of their floor plan, that might as well be the case if the flying stars in that area would have been the “untimely” stars which could trigger arguments, sickness or accidents.

I’m reminded of that old saying, “Good riddance to bad rubbish.” That might be rather harsh to say, but if a house doesn’t have a certain zone of the house that could have caused problems anyway, then it is not such a loss. And the reverse can also be taken into consideration: when a person wants to expand and add onto an area of the house deemed as “negative,” they may be creating more problems for themselves because of the expansion.

Generally speaking, if a floor plan is missing a certain directional zone, then the occupants in the house may be at a disadvantage in issues related to that direction. For example, the direction of east is related to the eldest son in the family. If there is an eldest son, or even the only son, living in that house, then this young male might have some health issues or be deficient in some way. Perhaps he is just an unruly child. Equally, the east direction is related to the feet, the throat, or the nervous system. So, anyone living in a house with a missing east sector may have those health issues listed.

Another way of looking at a missing sector is based on personal compatibility. For example, let us say that a man born in 1975 lives in a house with a missing northwest sector. The direction of northwest is his personal wealth direction. If it is missing, then that is one area of the house that he cannot personally take advantage of by dwelling in it.
If a house is rather large and missing just part of a sector, then it is categorically not as significant.

In contrast, if a certain directional zone is larger than the others, this can strengthen or embolden the family member associated with that direction. For example, the direction of west is related to the youngest daughter in a family. If there is a literal youngest daughter living in a house with an extended west sector, this youngest daughter might end up being rather powerful, ruling the house. Perhaps she has her parents rapped around her finger and gets whatever she wants.

As you learn more and more feng shui and all the layers of influence, you can better gauge just how serious a missing sector is, or even if it is a blessing in disguise.