The Center “Palace” of the House by Kartar Diamond 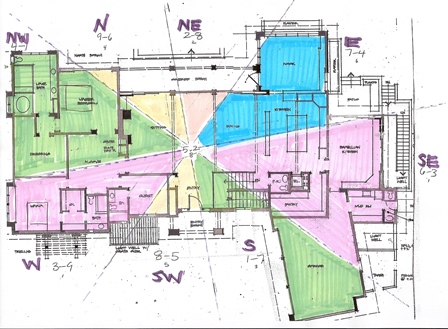 In the terminology used by Feng Shui Flying Star practitioners, we refer to the center point of a floor plan as the “center palace.” And yet, at most we can visualize it as a dot where all the eight directional zones converge, like the center of a pie. If it is even a point that can be distinct from any direction, it is still not actual literal physical floor space. Said differently, no one can spend time sitting in the center palace of their house.

You may be able to sit in the center area of your house from a mundane perspective, but you can’t sit in the “center palace” of a flying star chart and absorb energies there. And yet, the center palace does contain information when we chart out the energy blueprint of the whole house. That information affects the entire house and its occupants, not just an imaginary center.

What prompted this article was a question posed to me by a client who had just received her annual update. She knows there are eight directions (North, South, East, West, Southeast, Northeast, Northwest and Southwest). And yet we have nine annual stars. Each year, one of the nine stars will figuratively occupy the center palace. That “center” star is out of the game, so to speak. It’s like the game children play called “musical chairs,” where the kids walk around a set of chairs and when the music stops, one kid is left standing because there is one less chair than the number of children.

We can’t do remedies or enhancements for the center star(s) in the center palace even though we name two permanent stars and one annual star which can occupy the imaginary center palace. There are also monthly and daily stars which travel through all the eight directions and pass through the “center” as well. Placing the center star(s) on a chart in the center of a floor plan is more notional than literal. I have even published materials where I refer to the center star as sometimes being “trapped,” but this is not to be taken literally.

The information we glean from the center star calculations can tell us if a house is in a “locked” phase, which is a stifling cycle that can undermine the health and well-being of the occupants or their financial potential. This is very important information which is totally non-obvious, but can be calculated.

From the center palace calculations, we can also understand the hidden agenda of a house and its personality. And like your own personality, which doesn’t reside exclusively in a defined location like your arm or leg, your personality exists all over! These calculations are derived from when the house was built and in combination with its compass alignment. For example, a house which was built in 1970 and faces east is a house type which could cause bone or muscle problems for the occupants. This is an on-going vulnerability for that particular house type and that information comes from the “center” stars.

We can use this same east facing 1970 house as an example for more information gleaned from the center stars. From 2004 until 2024, this same house type is in what we call a “People Lock” which is one of those stifling phases, which can undermine the health of the occupants and even undermine fertility and conception. If that same “energy” which can sabotage fertility existed in a defined area of a house, like the southeast or northwest sector, we could use an element to correct that imbalance and help an occupant get pregnant. But when that same signature energy emanates from the “center” there is no remedy which we can do in the literal center of the house. The good news is that there are other enhancements and adjustments which can be done in other areas of the house to release that “trapped” energy.

So, when you read or hear about the “center” palace or the “center” stars in a feng shui audit, the information can reveal some very relevant and non-obvious information about the house as a whole. But the center palace is not a physical space like the eight basic directional zones in a floor plan.