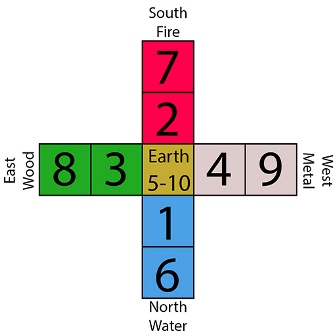 In Feng Shui theory, we have more than one depiction of the “Luo Shu,” (pronounced like low shoe). This is a mystical symbol, drenched in cosmological significance. The arrangement of the trigrams and their numerical coding is different for the “Pre-Heaven” chart compared to the “Post-Heaven” chart. Pre-Heaven implies what energies are like in the non-physical, un-manifested state. The Post-Heaven chart reflects more of the influence of the state that we humans experience on Earth. We have that saying, “As Above, So Below,” but in relation to the two Luo Shu charts, there is a difference.

We have another depiction of the stars called the He Tu, (pronounced like huh two). This cosmic “abacus” has numerical coding illustrated in beads. The stars, represented numerically, have a relationship with each other to define a type of pole magnetism. As illustrated, the white beads symbolize yang energy and the black beads represent yin energy. 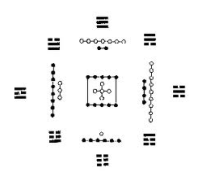 There is more meaning to these connections, but for this article I will distill it down to a simple recommendation of how you can use certain numbers as “lucky” numbers in your personal life planning.

In the He Tu, the south is linked to the stars as the numbers 2 and 7. Feng Shui practitioners are used to relating to the south as the “9 fire” energy, which is the case in the Post Heaven Luo Shu arrangement. But this hidden energy of the He Tu reveals why the 2 and 7 flying stars together with the 9 star can indicate a potential for an actual fire in a house. For our purposes here, the 2 and 7 numbers can be lucky for people born in the summer.

How to use these lucky numbers? Schedule an important activity on one of your good days, like on the 3rd or 8th of the month if you were born in spring. Play the lottery with your lucky numbers! Create a business name or logo which features your lucky numbers; use your imagination!

Related to Feng Shui, we have the sister science of Nine Star Ki. In Nine Star Ki, we acknowledge what season a person was born in, as an indicator of how that can influence constitutional health. We have four seasons, but the human gestation period is nine months, only three out of those four seasons. Each person misses a season or part of one, based on their birth date. Back in the days when people ate the foods native to their local area and season, the ancients could even see how what the mother ate affected her children in some significant and enduring ways.